The "Purr"fect Way To Spend The Day 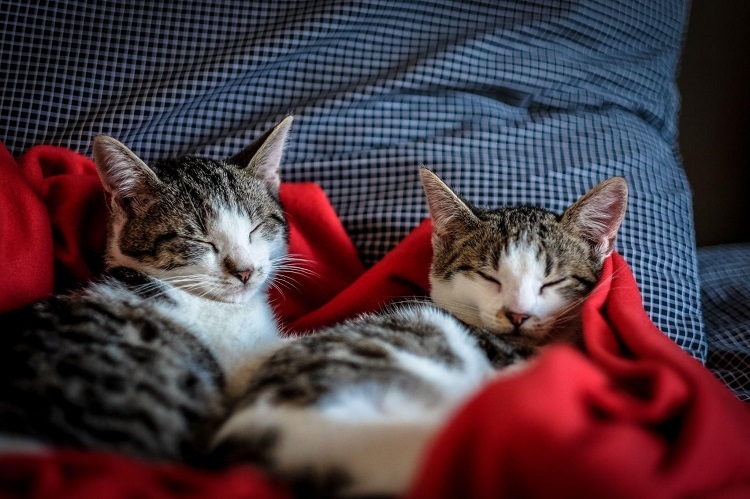 When it comes to cats, there’s an abundance of myths and superstitions surrounding their existence. Most of these rumors, especially the older superstitions around bad luck, have been debunked over the years. Since there isn’t a shortage of myths in the world, The Refined Feline has the scoop on what’s true and what’s false.

One more recent myth that has garnered attention is that pregnant women shouldn’t be living or interacting with felines. The myth pertains more to the cat’s litter box, however. It states that your child may be more prone to birth defects if you’re pregnant and scooping their boxes. This is in reference to Toxoplasma gondii, a common parasite found in cat feces. Although this parasite can be dangerous if pregnant individuals ingest it, there are easy ways to avoid this.

Stating that a pregnant woman shouldn’t live with a cat, however, is slightly extreme. It’s quite difficult to contract this parasite if you’re careful and follow basic precautions. The risk is significantly reduced if the pregnant woman thoroughly washes her hands after scooping, or wears gloves while scooping. You can also have another member of the household simply scoop the boxes too, and completely eliminate the risk.

Myth #2: Declawing Cats Is Fine And Won’t Cause Any Negative Side Effects

For many years, individuals have used declawing as a quick way to avoid ruined furniture or skin. But the actual surgery of declawing is much more involved than removing the nails from a cat’s paw, as their nails are retractable. Vets basically have to remove part of the cat’s toes in order to remove their nails. In terms of humans, it would be the equivalent of us losing our first knuckle! The surgery will often leave bone fragments as well, and this can be painful when cats are walking. These fragments can make an already in-depth surgery even more uncomfortable after healing.

Cat’s paws may also become extra sensitive, leading to behavior issues down the road. One common issue seen is inappropriate urination, as litter can be painful to their now sensitive paws. There is a way to leave you and your feline much happier and less stressed without resorting to declawing. You can trim your cat’s nails closer and more frequently, apply adhesive tape to furniture, and use natural pheromones. Another great way to ensure your cat isn’t turning to your furniture is providing enough appropriate scratching surfaces for them to use or lots of cat furniture!

This myth could be viewed as more of a misconception as cow’s milk has been a go-to for many years. People assume any milk works for another species, and  would give cow’s milk to orphaned or stray kittens regularly. But like other species, including humans, cats adapted to drink their own species’ milk while growing. And even when they age, cats will begin to develop an intolerance to milk. If they do happen to drink cow’s milk as an adult, it can cause vomiting and diarrhea, and isn’t recommended. Can you believe that?

This myth has been the norm for many years, as it’s only natural to believe a purring cat is content. But any cat owner who’s discovered their purring cat in a less than comfortable situation may have realized something is up. Recent research has found that a cat’s purr is highly therapeutic, maybe even on a wavelength designed specifically for healing. So of course cats will purr when they’re happy, but also when they’re in pain or stressed. Furreal!

They may be putting their purr to use for healing rather than basic enjoyment. You will be able to note the differences between a good purr and a bad purr, though. The easiest way is to focus on kitty’s body language. If they’re bright-eyed and seeking attention while purring, your cat is most likely feeling sassy and content. If they’re hiding in a corner and reluctant to interact while purring, this is a sign that something could be wrong. Purring during a moment of distress is a rare occurrence as most of the time your purring feline is happy and healthy!

If you’ve witnessed your cat not gracefully landing on their feet, you may be on the fence about this myth already. While most cats do land on their feet easily, this action depends on a lot of factors so it’s not always a guarantee. A cat’s reflexes are lightning quick and combined with a highly flexible spine, this allows them ample turning capabilities while landing. But factors like age, arthritis, and other health factors can slow a cat’s response time enough that they can’t make it. Cats can end up injuring themselves fairly easily from falls, so keep an eye on your kitty. Make sure to help them maintain balance while landing from any height.

Myth #6: Witnessing the Miracle of Birth

You may have heard it’s wise to let your female cat have a litter of kittens before being spayed -or you may want to see the joy of feline childbirth. The reality of the situation is about pet overpopulation, especially in animal shelters. Many kittens born from these first litters then need homes, which can decrease the overall number of cats getting adopted. Or the kittens may end up in these shelters later on, increasing the amount of pets needing homes. Cats can get pregnant as young as four months old, too. And young mothers can even get pregnant again while their current litter is still nursing! For these reasons, it’s best to forgo the first litter and keep your female indoors until she can be spayed.

Trying to figure out human years equivalent to cat years has changed a lot over the years. The original consensus was seven years is equal to one human year, but that’s actually changed. Hooray for more kitty time! The new equivalent is now thought to be equal to about 16 years. A kitten grows through most of their early childhood years by the time they’re one year, so they’d be older. Since cats are adults at one year old, their second year adds more too, roughly 9-10 years to their age. Then about 4-5 years is added on for each additional year after. Many cats have lived into their 20s, and there are even a few rare 30 year old cats too!

This is a highly dangerous myth that has only recently started in the last few decades. People wanting to become healthier in their diets have sparked an increase in diet changes for their pets. But for cats, being vegan is not possible, and even life-threatening. Cats are obligate carnivores, meaning they are required to eat meat to get the proper nutrients they need like taurine. People are omnivores, meaning they can get their required nutrients from many different foods. Cats need meat in their diet, otherwise they will begin to develop serious health issues without it. So, ensure your furry friend gets their purr-otein every meal, every day!

Although every cat’s activity levels will vary, that doesn’t mean they don’t need daily exercise to stay healthy. Each cat will require a different amount of playtime, and will vary with your cat’s age, health, and more. Ideally, cats should be getting an hour of exercise, especially if they are super playful or younger. This playtime should be in intervals during the day so your cat has a  chance to rest. Cats have a lot of energy but typically use it up in short bursts, so about 15 minutes at a time is purrfect. Larger or older felines may not be as excited to play, and require some coaxing. They may need shorter time frames too, since they may have joint issues or tire easily. Mental stimulation is just as important as physical, so be sure to utilize food puzzles and to keep their brain working.

Along with light exercise and playing routine, the cats also need to visit the vet clinic twice in a week for overall checkup. Can cats get kennel cough : It is a common question being asked by cat owner after rise in reported cases of kennel cough in dogs. You can learn more about it by clicking the link.

Is your cat constantly getting the zoomies around 3 AM? It may feel like that, but most of their natural hunting doesn’t occur during the middle of the night. Cats actually hunt around dusk and dawn, or what’s known as crepuscular, which is when their eyesight is optimal. Cats can certainly be playful all throughout the day, so be ready to get those wiggles out whenever they start up! Playing with them to release that extra energy during the day will help your feline stay quieter during the nighttime too.

How many of these myths did you already know were false?

Moving Your Cat ? Here are few things to keep in mind

tonsofcats - November 14, 2022 0
One of the most annoying behavior of pets, especially cats, they often sleep any. Sofa living room, television room sofa, even our own bed often...

Luthfi Fitriyadi - October 1, 2022 0
Introduction While many National Parks have some similarities in terms of features and selections, Great Sand Dunes National Park offers two things that most others...

Luthfi Fitriyadi - August 24, 2022 0
Declawing a cat may seem like a bit of operation, similar to clipping your fingernails. However, the procedure requires removing bones from the tips...
© 2020 - Tonsofcats.com